Overview The VEX IQ Robot Brain has 12 identical Smart Ports. Plug any VEX IQ device into any port and the device is automatically detected - there are no dedicated input or output banks. Smart Port devices include: Smart Motor, Distance Sensor, Color Sensor, Gyro Sensor, Touch LED, and Bumper Switch. The Talon SRX Motor Controller is a “smart motor controller” from Cross The Road Electronics/VEX Robotics. The Talon SRX can be controlled over the CAN bus or PWM interface. When using the CAN bus control, this device can take inputs from limit switches and potentiometers, encoders, or similar sensors in order to perform advanced control.

Today I want to relay some more useful information from the awesome jpearman on the VEX Forum regarding motor ports 1 & 10 that will affect the way you’ll want to allocate ports in your robot design.

I seem to be writing encyclopedic posts lately, so here’s today’s table of contents:

Anyone who has looked at the motor ports on the cortex for more than 5 seconds can see that ports 1 and 10 are different than the rest, namely that they are 2-prong plugs instead of 3-prong. That’s because the motor controller for these ports is built into the cortex instead of being an external doo-dad that you have to install between the 2-wire motor and the 3-prong motor port.

The insides of a cortex. Check out this page to see a step-by-step, labeled dismantling.

The cortex actually has 2 little computers in it: the User CPU and the Master CPU. Per this other jpearman VEX Forum post, these 2 CPUs have their responsibilities divvied up as follows:

The motor controllers then have their own pulse timing delay on top of this 15ms inter-CPU timing, so adding these together, it is possible that there could be a sizable delay between the instruction from the User CPU to reality on the robot.

Inside, Outside, Not the Same

Wow, let’s say that again. The motor controllers for ports 1 & 10 are connected directly to the User CPU, involving no communications delay; the motor controllers for ports 2-9 are out on extension cords—with their own PWM (pulse width modulation) cycle timing—that first require communication between the User CPU and the Master CPU, which occurs every 15ms. In this VEX Forum analysis, jpearman estimates that motors on ports 2-9 have (at best) a 15ms delay in receiving information, whereas ports 1 & 10 may be getting updated as fas as every 2ms.

He then did some oscilloscope traces, which are shown below. Yellow = signal, telling the motors when to change speed; blue = port 10; pink = port 3. In the first test here, he changes the motor speed repeatedly from 127 to -127 every 40ms. You can see from the graph that the port 10 motor tracks the signal precisely, whereas port 3 has a significant delay and results in rather random amounts of time at each speed, shown by the uneven lengths of the horizontal bars in the graph.

Next he upped the stakes, and did the same test, except told the program to reverse direction from 127 to -127 every *4* milliseconds. The results are even more dramatic:

It can be seen that the motor on port 10 is able to keep up with this increase in changing requested speed; however, the motor on port 3 is not able to and changes randomly depending on the relationship between the motor speed request and the SPI message being transmitted to the master cpu [the timing of the communication between User & Master CPU].

Last year my daughter was building a robot for her science fair project, which had a holonomic chassis. It was the first time either of us had built a holonomic drive, and we didn’t know much about any specifics (“How hard could it be?” Ha ha.). We happened to be low on either extension wires or motor controllers, I can’t remember which, so we plugged 2 wheels of the chassis into ports 1 and 10 and 2 wheels into some of ports 2-9. Oh My God it was the most horrible-driving jerky spastic thing you could possibly imagine. It was a complete disaster! And it took us a LONG time to figure out that this was the problem, since this was the first time we had ever used ports 1 or 10 on any robot. (We figured it out by process of elimination; after you strip things down to just a chassis & holonomic joystick block, there are a finite number variables in play.)

Looking at the graph above tells the whole story! Yep. Don’t need to wonder any further…

To restate the obvious, in case you’re skimming this post, DON’T COMBINE PORT 1 & 10 MOTORS WITH PORT 2-9 MOTORS IF THEY NEED TO MATCH SPEED OR BE COORDINATED WITH EACH OTHER. Use ports 1 & 10 either for independent mechanisms, or for a pair of motors that work in concert, such as 2 motors that raise an arm. Do not use a combination of port types for a lift, or for your chassis, or for any other part of your robot that is supposed to function as a unified system (and especially not for a holonomic drive!). It just won’t work.

At the very start of jpearman’s first post above regarding ports 1 & 10, he mentions that these 2 ports would be good to use for a system employing PID control because they respond so quickly and are so sensitive. Looking at the second oscilloscope graph above makes me want to do a facepalm when I think about our Nothing but Net flywheel from last year. It was horribly unresponsive, massively slowing down after a ball got shot through. We attempted to employ a PID algorithm to keep it at a constant speed, but there was no algorithm in the world that was going to get our flywheel to regain speed fast enough. Had we known about how differently ports 1 & 10 respond to instructions, we would at least have given them a try before abandoning all hope. (We ended up using a limit switch instead to sense when a ball was exiting the flywheel, and gave it a large burst of power to compensate; it worked well in the end.)

In yet a third VEX Forum post, jpearman did some speed testing on a motor plugged into port 10 versus one with an external motor controller. [He did this particular testing before the introduction of the current 393 motors, but there’s no reason to think that the results would be much different.] First, here’s the output graph (x-axis is VEX motor power, y-axis is motor RPM):

The above figures are all based on a testing environment, so must be taken with a grain of salt, but it is generally accepted that speeds on the external motor controllers definitely max out somewhere north of power 100 (maybe less?), and that you will not get any performance improvement (other than psychological) by increasing your motor from, say 105 to 120 power. 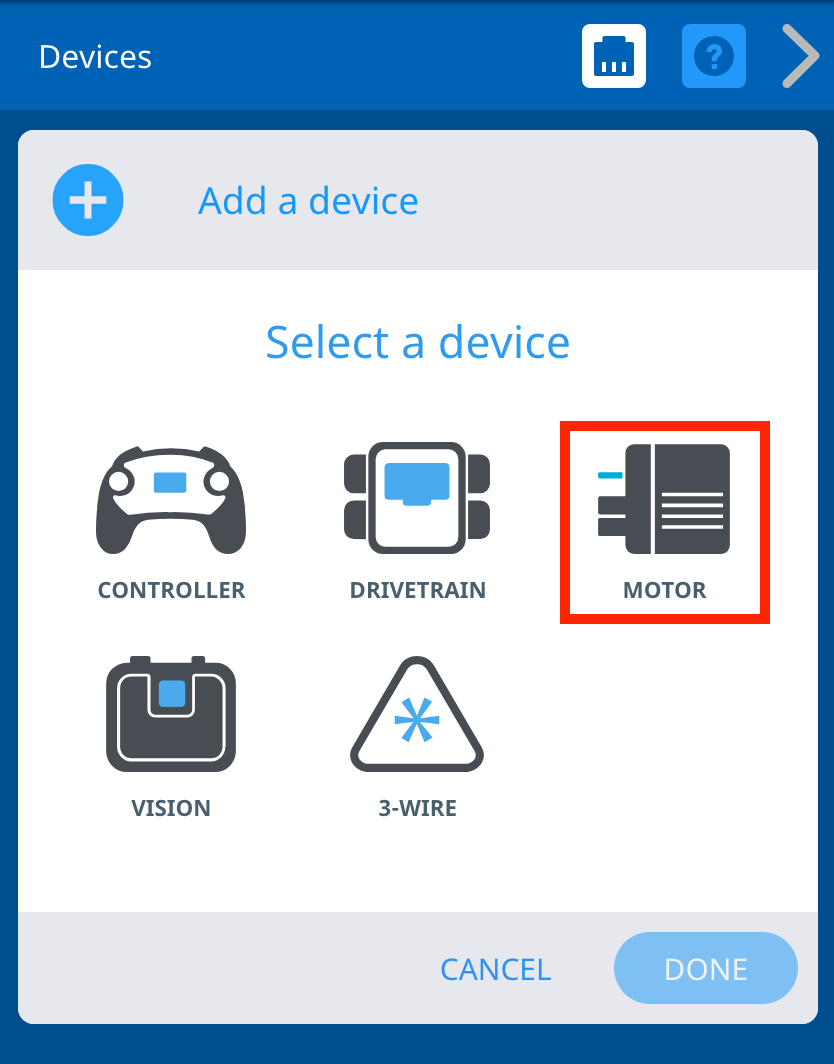 As noted, the graph above was made using the older 269 motors; there’s a quadrant of an updated graph (below) showing the motor controller line only for the 269 and 393 motors [note: this graph does not include any information on ports 1 or 10, though it unfortunately uses the same color scheme as the graph above]. As expected, the new and old motors have very similar curves, and max out at almost the exact same power level. The newer 393 motor does not achieve the same maximum speed as the older 269 motor, though it does show more responsiveness in the lower power levels.

In my previous post I encouraged mentors and coaches to surf the VEX Forum when you have the time. I came across the oscilloscope images above while I was following a thread from another, newer post, and my eyes just bugged out of my head! I couldn’t believe the difference between the 2 motor controller types, and once I read the various explanations, so many other things fell into place.

I learned so much just following the threads through that I wanted to compile it here so that it was a little more digestible, and all in one place in lieu of being spread across multiple Forum posts and comment threads. Again, a debt of gratitude goes to jpearman for the countless hours of scientific research and testing that he has done to educate the rest of the VEX community. I hope that you find this information helpful as you are thinking about your robot for the coming year, and I hope that the basic explanation offered here about how the communication processes happen inside the cortex is of value (see my earlier post on IMEs for details on how the cortex talks to the IME daisy chain).

As always if you feel that I’ve missed some important information, or I have written something in error, please email me and I am more than happy to edit this post; my interest is in spreading knowledge and helping to educating other coaches and want to have complete and accurate information.